If I had the willpower to be vegan I totally would be. I love the idea of a plant based diet because it is so clean, low impact on the world and studies have shown it to carry immense health benefits. It also doesn’t hurt that it keeps my grocery bill a bit lower and makes me feel better about spending more to buy the best quality meat I can find when I do buy it. That said, even with as much as I cook and think about food (basically 100% of the time) I have had a hard time finding vegan meals that live up to the flavor expectations I have (with the exception of Indian food, seriously, there are awesome vegan Indian dishes galore). Vegetarian chili is one I’ve tried before with zero success, it always leaves me feeling like I got fooled into making vegetable stew. If I wanted vegetable stew I would have made it, but I wanted chili, damn it! Given those failed attempts I surprised myself when I decided this recipe for vegan chili was worth trying and would be different than the rest. Maybe it was the caramelized onions, or maybe the promise of a crock pot hands off approach, but for whatever reason I decided to give it another shot. Boy am I glad I did! This is a chili so rich in flavor I was slightly confused with each bite…I knew there wasn’t any meat, but it had the depth of chili with meat. The trick, those caramelized onions I mentioned and a quick hit with the immersion blender before serving to give it a more traditional chili consistency. The result, amazingness. AMAZINGNESS! I made mine vegetarian by serving with grated cheddar, avocado, green onions and cottage cheese (if you haven’t tried it, you must, a little with each bite of chili, delish I promise), but you could stick to avocado and green onion and be just as happy. Let me know what you think!

1 onion, sliced (I threw in an extra half an onion because I LOVE onions in chili)
1 tbs fresh chopped garlic
1 red pepper, chopped
1 green pepper, chopped
2-4 medium carrots, chopped
2 medium zucchinis, chopped
1/4 cup frozen corn (I would skip this next time, but if you like corn go for it)
2 cans black beans
2 14 oz cans diced tomatoes (with green chiles, if you can find them)
1 cup vegetable broth
1 cup water
1 tbs chili powder
2 tsp cumin
one glug of olive oil
pinch of cinnamon
salt and pepper to your taste

1. Slice the onion into thin strips and add to the largest pan you have (to give them lots of room) with some olive oil to caramelize. A medium-low heat is best here so they don’t overcook. Cook for about 40 minutes, stirring occassionally, or until they are golden brown. I did this step while taking care of some emails and reading for work and you only need to stir every 10 minutes or so.

2. Place the onions in the bottom of the crock pot and add the beans, tomatoes, all veggies and corn.

4. Cook on high for 6 hours or low for 8 hours. When the chili is done use your immersion blender (like this one) directly in the crock pot or your blender working in batches (with the vent open since it will be hot liquid) to puree 1/3 – 1/2 of the chili. I did at least half and was thrilled with the resulting consistency. 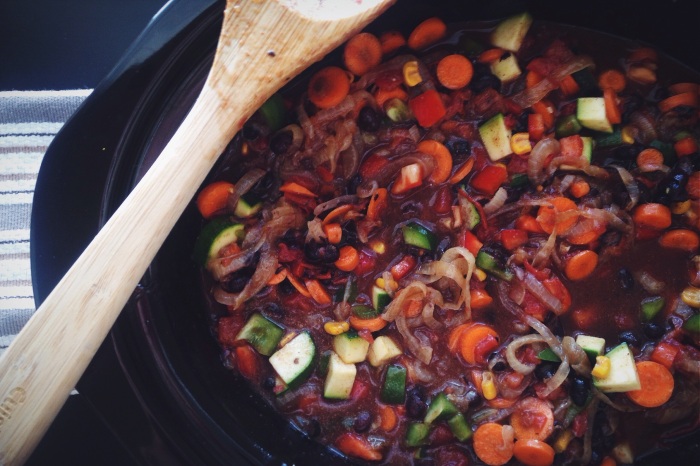 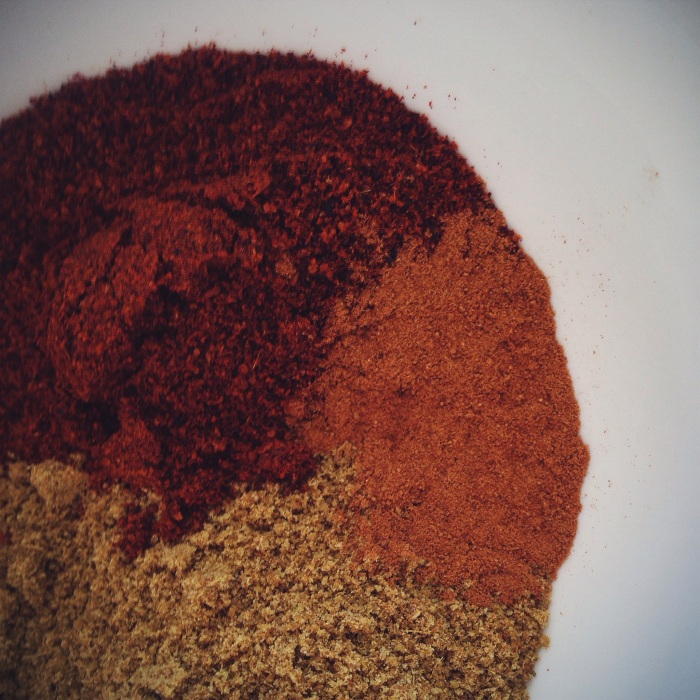